Where do I even start…I was in Golega for the entire length of the festival. I saw the full range of personalities that this wonderful place has to offer. I arrived on Friday the 6th and the party was already going.

The weekends are the most heavily attended part of the event. Unfortunately, they are attended by not only horse people, but also by people looking for a giant party, many of which have no interest in or respect for horses. So the weekends are…interesting.

I stayed in the house of Ricardo Chibanga, a retired but well known matador. He and his daughter live a few blocks from “the manga,” or central arena. When I stepped outside Saturday morning, horses passed by the front door on the stone streets.

The horses own the town for these 10 days, all traffic yielding to them. In addition to riders, there are also a number of carriages of all sizes, pulled by many breeds of horse or pony. The hub of activity is “the manga,” or central area.

During the day and evening, there are shows or competitions. At night, many people get on their horses to ride in the arena and around the town.

During the week, there were several nighttime shows. These are from the show of Master Luis Valença.

I should give you an idea of how time works in they little corner of Portugal. There is no time. It’s a twighlight zone….. You may start your day at a respectable hour, going around and visiting the shops and the many “casetas” where breeders showcase their horses around the arena. 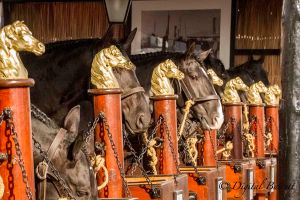 Then somewhere around noon or one, you think, “Hmmm almoço (lunch) sounds good.” If you know anyone Portuguese, they will invite you to the first of two LOOOONNGGGG meals. I had the pleasure of enjoying several lunches with my friends in their little stable.

The central aisle way was cleared, tables set up, chairs placed, table cloth rolled out, and I swear just like Disney, the bowls and plates of food rolled out with the table cloth. Heaps of bread and meats. And potato chips…. It might be a food group here….I see potato chips a lot…

And the wine, oh the WINE. They don’t bother with pesky bottles…they have jugs…gallons….vats!!!! Wine is like water.

Now at the beginning of this little adventure, I knew not a lick of Portuguese. After being in Golega for a week, I’m not doing too bad. The problem I have is that Portuguese people speak very fast and they mumble a lot. Whereas Spanish is spoken with open mouthed vowels, Portuguese is more close mouthed. So if I could get people to slow down and separate their words, I did ok.

Anyway, back to lunch. Friends come and join the table, passing the various plates of food around. And the wine, don’t forget the wine. As one friend put it, “Only one finger, please!” And he would hold his finger vertically next to the cup and pour until it reached near the top. If your cup was low, it didn’t stay that way for long.

Lunch went from about 1 pm to maybe 4 pm. Here is where I learned something else about the Portuguese. After meals, they have a coffee? Why? Because they have nearly sedated themselves with all the WINE! 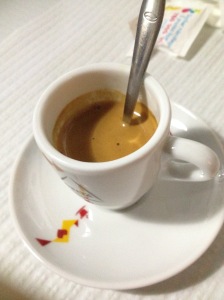 And Portuguese coffee is more like espresso. In a tiny cup and fully loaded…. A tiny cup of crack 🙂

So once lunch is over and you’ve been revived from your wine stupor… then you have a few hours to maybe ride your horse, do some shopping, or if you’re smart, take a nap. Then around 8 or 9 pm, JANTAR (dinner)!!!!! Now starts long meal number 2! I again was fortunate to have friends who did this family style. We went to the house they rented for the week where traditional food was prepared. Most meals consisted of a meat, a side of either rice or potato, and a salad. There were also several very tasty soups. Dinner was sometimes preceded by appetizers of cheese and sausage or chorizo. Dinner stretches clear until 11 or maybe midnight. Then the night starts….. Oh and did I mention the wine? Don’t forget the wine. But now we have added an additional spirit….. abafado….it’s like a dessert wine, sweet, but not to be confused with port….

Post dinner, you get dressed in your finest riding outfit, braid your pony, and mount up!!! 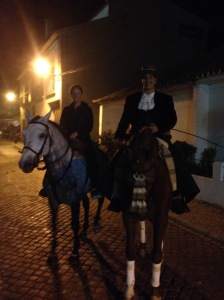 My friend Joana Andrade was kind enough to bring some extra horses, and she let me ride a couple! We went to the manga first, then out into the streets! Most riders wander around for a while and then basically start to bar hop. All of the bars are either on the street or will do curbside service. 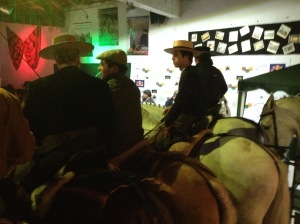 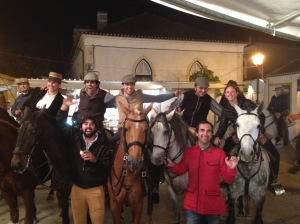 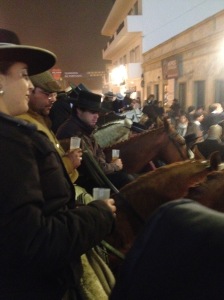 The night out can go clear until the dawn. During the week, it’s pretty tame. Yes there are people and horses everywhere, but it’s tame…compared to the weekend. The weekend is when the non-horse folk join in and insanity arrives.

On Thursday night, I was offered a different Golega experience…riding behind another rider. 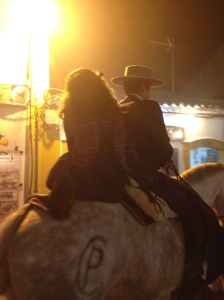 Many of the riders have seats or pads behind their saddles where they can carry another person. So I put my trusty steed back in his stall and climbed on behind the saddle. This was a different way to experience a place. Horses need to be prepared for riding like this as you sit over an area they typically don’t carry weight. And it’s a very different feeling. It’s not like the little riding you did bareback with your friends. This time you have a handy saddle to hang on to (or your driver) and a pad under your butt. But still, you’re almost over the horse’s hips. So the movement is different. Once I got oriented though, no problem. It was nice to go around and watch, not being responsible for the horse. Just responsible for not falling off. 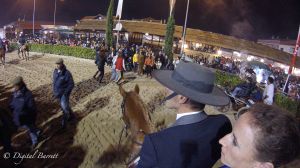 Now, any of you that know me….you know I’m social….communicative…Ok fine, I like to talk. Here….no talking! I can’t! “Eu nao falo Portugues!!!!” (I don’t speak Portuguese) So all I could do was listen and watch. You can learn a lot about people by listening to the tone of their voice and watching they facial expressions and body language. So sitting behind someone while they talk and have conversations was an exercise in observation. Here is a little video from the craziest night!!!!!

Mid-week, I decided I needed to blend in with the locals, so I got a traditional Portuguese ladies riding costume. 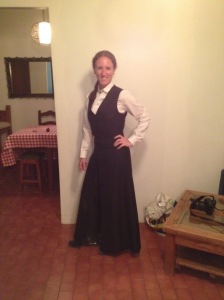 Let me introduce you to this critter by saying that it fits nicely, flatters you. But holy mother of BUTTONS!!!!! There must be 42…. On the pants….on the skirt….on the shirt….on the vest….. If you are in any kind of hurry, like you drank a lot and now nature is calling frantically, it’s a real problem… But you look pretty darn good…. No pain, no gain, eh.

*** Thank you Antonio Correia de Mendonça for the photos *** 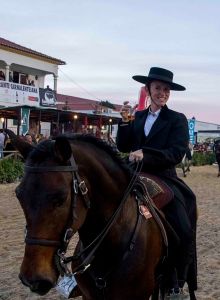 The last weekend was the busiest with HOARDS of people cramming the streets and the area around the manga. The manga itself was a little bit chaotic. Horses and carriages all circling like leaves in a whirlpool.

Below you can enjoy a ride in the manga, though on a much tamer day.

The last night, Sunday night was blissfully quiet. My friends and I walked the streets at 3 am, all was silent. No people, no horses. Just the remnants of good times and happy memories.