Ok, I am in Portugal. And since this trip has so far been mind blowing, I figured it might be fun to share it all with you. All at once. Instead of having to tell these stories a hundred times. If you know me well, you may get some of the insider double dog dirt stories… who knows…. Or maybe not. Those may stay only with me 😉

I’m going to do these posts in random blocks of time because sticking to a schedule while here is not only impractical, but setting the bar way too high for me. This post will be sickening in length if I don’t break it up. So there may be a swarm of posts. Anyway, you’ll figure it out.

Ok a travel blog. Right. So a brief intro:

I am a horse trainer, a photographer, and a writer. It appears this trip will hit all of those passions. I arrived at night so I can’t really speak to the glory of the Portuguese countryside from the air, though I’m sure it is spectacular.

I stayed my first couple of days in an AirBnB apartment just on the edge of the Alfama neighborhood of Lisbon. Like most cities, it’s squawking until very late at night, even in the areas more lightly traveled. I awoke on my first morning and went to a local café that was recommended by the owner of the apartment.

I have to say the language barrier has been intimidating. I learned Spanish in high school, and yes that does help, but not as much as you’d think. Spanish and Portuguese share common roots, but each are spoken very differently. The Portuguese “s” is frequently a “sh” sound, vowels on the end of words are not even bothered with, and there is a very challenging phlegm sound I have yet to make correctly. And knowing Spanish actually means I have to translate things twice! My brain remembers some things from Spanish and so attempts to say those things, but I have to stop and try to remember what I have learned of Portuguese. This is not unlike the issues I have when switching from west coast swing to country two step: one is a dance based on a pattern of 3 and the other is a pattern of 2.

Now back to the café… I have learned a few key Portuguese phrases like “Do you speak English?” Very important phrase! Thankfully the guy behind the counter did speak English. So I ordered breakfast and went for a walk. I ended up down in the Baixa area. This is a tourist stop, so there were lots of shops and lots of tourists. I actually felt a little more relaxed knowing I wasn’t the only one walking around slightly clueless.

Portuguese architecture is just glorious. It’s like any classic city in Europe, with small alleys and cafés spilling out into the streets. The buildings are painted all sorts of colors too. That’s something we really need to do in the United States…we need more color! (Side bar: Americans are not from America. It is a thing both in Europe and Australia to say Americans are from America. But we are not… America is 2 continents… North America and South America. I know, it’s confusing, especially since we call ourselves AmericaNS. You wouldn’t call a Canadian or a Costa Rican an American, and yet people from the United States are said to be from America. No. We are from the United States OF America. This isn’t a huge deal, and true to our culture, we will be polite and not correct you, but I tell ya, every American I’ve talked to who has gone overseas mentions that they were said to be from America…not the United States. Ok, off soap box.)

In the afternoon, my friend Antonio Correia de Mendonça (the funny ç is an “s” sound…and the “s” is an “sh” sound, are ya still with me?) picked me up to take me to see Master Luís Valença, considered one of the few remaining masters of classical dressage.

Now more background on me: I spent 18 months living with and working for Manolo Mendez in Australia. Manolo is also considered a master of classical dressage, though he isn’t a fan of the title master. A life long student of the horse, Manolo would be the first to tell you he is a perpetual student. But to the rest of the world, he is a master of his art. So I had the utter privilege (I can never spell that word right…) of learning from Manolo directly. Manolo is, in my mind, singular in his approach to horses, truly accounting for the horse’s experience at every step mentally, emotionally, and psychologically.

So to go see Luís Valença was a treat! Antonio drove me out of Lisbon and to Vila Franca de Xira (“x” is also an “sh” sound….that’s 2 different letters that make a “sh” sound! I’m sure there are more). We turned off the highway and made a quick turn next to a hillside, almost under the highway, onto a dirt road. I thought, “You must be kidding. There can’t be a horse stable here.” And yet there it was- Valença’s Centro Equestre da Lezíria Grande.

The stable blocks were painted white, trimmed with a bright, buttercup yellow that gave the place a happy feeling with a roof of Spanish tile. Elsewhere buildings were painted yellow and red, again making the whole place feel bright. The indoor arena is a traditional Portuguese arena with pillars in the middle. Several students were there getting lessons. I used to giggle when I was at Manolo’s place, La Mancha. Everyday people can come and ride with these great horsemen. Like Manolo, Luís is the same- anyone can come ride and learn. Luís drove in shortly after we arrived. Antonio had studied with Luís for several years keeping his horse at the facility. Luís greeted Antonio warmly and there was lots of laughing and smiling. Luís is a very warm and friendly character. He enjoys laughing and telling good stories.

After the usual meet and greet pleasantries, I was taken down a narrow hallway and let into a locked room. Inside were all the costumes used in Apassionata and various shows. These are exquisitely detailed jackets and vests in vibrant colors. 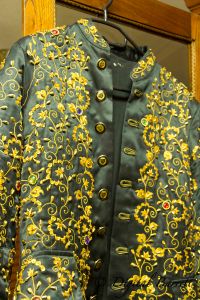 I listened as Luís told me about the years during the Portuguese revolution, when you were considered a fascist if you owned or worked with horses. Many horsemen had to flee the country taking as many horses with them as possible. Whole stud farms sent their mares and stallions to Spain for protection. If it weren’t for some quick thinking, the lusitano would not be here today. The legendary Veiga stud, famous for it’s fiery horses, would have been wiped out, along with many others. Luís saved many, many horses, quickly getting them out of Portugal before they could be destroyed. He told everyone, “If you have a great horse, send it to me, and I’ll get it out.” And he did. It is mind boggling to think that the lusitano, this exceptional breed, was almost erased from existence, not unlike the Lipizzans during World War II.

We came back to the arena and watched the end of a couple of lessons. Then a student brought in a horse dressed for in hand work. I was about to watch Luís do some work with the capriole. Luís said, “This horse will be asleep, snoring when he’s standing outside waiting for his turn. But turn on the lights and lead him into the ring, and he comes alive.” The white horse did indeed come alive, and he knew exactly what his job was. He vibrated, not in a nervous way, but in an anticipatory way. Capriole is no easy feat. The horse has to launch himself vertically and then cannon those hind legs out behind and bring them back under in time to land on his feet. 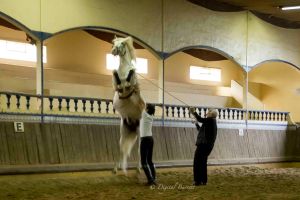 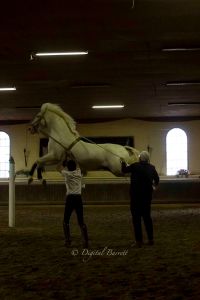 The roots of the capriole was as a military maneuver. If you wanted to decapitate the guy behind you, nothing works better than using the deadly weapons under your butt. And boy could this horse fire out behind. He did small levades several times, getting the balance and timing just right. And then he would rear straight up and launch himself into the air. At the exact right moment, Luís would snap the whip and the hind legs would fire out and back quickly enough so that the horse landed on his feet like a cat. What a movement!

After he was finished, it was time to go. I thanked Luís and said hopefully I would have time for a lesson before I went home.

If I ever go home…

I had to include this dog. I am finding the coolest dogs around every corner. Maybe I need a dog blog post….